Learn Robotics Programming Online Free With These Coursera Plus Courses 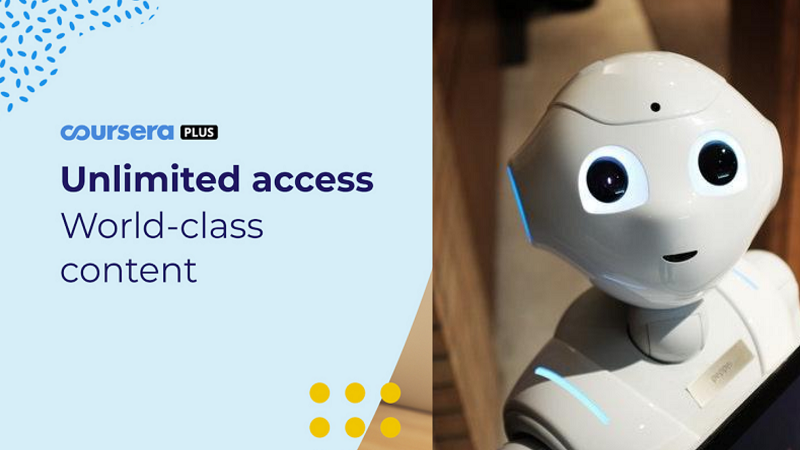 Robotics, also known as automation, is now considered a General Purpose Technology. This means that robotics has the potential to remarkably impact the world’s progress, both socially and economically. It, therefore, becomes increasingly important to learn robotics and weigh its potential benefits in preparing today’s workforce for the technology of tomorrow. This post explores how you can kick start your career as a robotics engineer, career prospects, step-by-step guide to learning robotics programming online free, and the top online robotics courses that you can sign up and build your skills.

So, what does a robotics engineer do?

Simply put, a robotics engineer utilizes his skills to build robots and their technology for application in various sectors such as quality control and manufacturing. Some of the skills sets you will need to be a robotics engineer includes the following:

Robotics engineering is considered a high-end profession in the tech world. There are amazing job opportunities awaiting you after attaining your robotics skills. As a robotics engineer, you can work in the manufacturing sector, medical field, automation sector, life science, aerospace engineering, and agricultural sector among others. And there is a great demand for robotics engineers in the gaming world and manufacturing units too. With great merits, you can land yourself a dream job at top organizations like NASA, Boeing, and ISRO.

Job profile of a robotic engineer

You can take up the following job profiles upon completing your robotics training. You can get placed as robotics analyst, test engineer, robot design engineer, senior robotics specialist, robotics system engineer, robotics programmer, aerospace engineer, and quality assurance technician among others.

Building and deploying robots can bring lasting fulfillment and even become a rewarding career. If you are asking the question “can I learn robotics online for free?,” the best way to get started is to develop your proficiency in computer science, programming, linear algebra, and physics. From here, you can sign up for free online robotics classes, participate in clubs and competitions, and build your basic robotics skills over time. Regardless of your age or background, you can actually learn robotics engineering online free.

Start off with the basics

Start off by practicing basic programming so you can program your own robots. Programming is a foundational element of robotics, and you will need to master how to create conditional statements, use variables, functions, and other basic coding skills. Choose a programming language and study it to boost your skills.

Here are some of the most important programming languages for robotics.

Learning linear algebra will greatly prepare you for building robots. Basic algebra is important for both programming your robots and tweaking their codes. So be sure to sign up for algebra courses to strengthen your mathematical skills.

Study physics as a background for learning robotics

Part of building robots involves an understanding of how your robot will move and execute its functions. Therefore, it is important that you have some knowledge of physics.

While you can study robotics on your own, you can master advanced techniques with much ease when you sign up to learn robotics programming online. There are several online robotics courses that you can enroll with to develop your skills. Some of these courses are free while others are paid

With Scratch, all a programmer needs to do is drag and connect blocks together. Scratch is written in by combining Squeak, JavaScript, and ActionScript.

While you are not going to write any industrial robot program in Scratch, it is an excellent programming language for beginners seeking to build a future in robotics engineering.

Here are a few Scratch Courses worth checking out:

i. Programming with Scratch from The Hong Kong University of Science and Technology

MTLAB (and its open source siblings like Octave) are quite popular with robotics engineers for developing control systems and data analysis. MATLAB is extensively used in research and data processing as well as in some university courses.

Additionally, there is a Robotics Toolbox for MATLAB that you can learn for purposes of robotics engineering. If you want to analyze data, generate advanced graphs, and implement control systems, then you better learn MATLAB.

Here are beginner MATLAB courses worth checking out:

i. Introduction to Programming with MATLAB by Vanderbilt University

ii. MATLAB Programming for Engineers and Scientists from Vanderbilt University

iii. Data Processing and Feature Engineering with MATLAB by MathWorks

C# is a Microsoft powered proprietary programming language. We are including it in this list for these two reasons:

C# is quite difficult to learn thanks to its complexity. It is recommended that you learn C and C++ first before getting to C#.

Beginner C# Courses worth checking out.

i. Introduction to C# Programming and Unity from University of Colorado

ii. Programming in C#: A comprehensive approach to C# Fundamentals

If you are coming to robotics from a computer science background, you already have knowledge of Java. Java is an interpretive language, meaning that it is not compiled into machine code. Rather, the Java Virtual Machine interprets the instructions at a time, allowing you to implement the same code on multiple machines.

Java is one of the main languages of several modern AIs, like IBM’s Watson and AlphaGo.

i. Java Programming and Software Engineering Fundamentals by Duke University

There are also tons of free Python libraries, meaning that you do not have to “reinvent the wheel” when you need to implement some of the basic functionalities. And since Python allows simple bindings with C/C++ code, you can implement performance-heavy parts of the code to avoid performance loss. With more and more robotics-friendly electronics now backing Python “out-of-the-box” (like Raspberry Pi), you are likely to see a lot more Python in robotics.

i. Python for Everybody by University of Michigan

ii. Programming for Everybody (Getting Started with Python) by University of Michigan

i. Introduction to Programming in C from Duke University

iii. C++ For C Programmers, Part A by University of California Santa Cruz

Online Robotics courses on Coursera Plus: Are they worth it?

If you are looking for University and Graduate-Level online robotics courses, then Coursera is the platform for you. However, learning robotics online with Coursera can get quite expensive if you do not have the willpower and dedication to follow through with your learning.

This is where Coursera Plus comes in. Rather than paying for each course separately, Coursera Plus allows you to access a collection of 3,900+ courses for $399 per year. This is a great deal if you want more time to review the course materials and do not want to feel  “rushed” to complete your desired course within the estimated course schedule.

Some organizations pay for Coursera Plus plan as part of their Personal and Career Development Plan. Still some organizations have access to Coursera for Business, so it is worth discussing your learning needs with your team leader.

Ready to start learning? Here is a look at some of the best online Robotics courses you can access with your Coursera Plus subscription.

I. Manufacturing and Automation

If your goal is to work in a factory with automation equipment or industrial robots, then taking manufacturing courses will be fundamental to your ability to earn a promotion.

However, if your desire is to work on “hardcore” software engineering for robotics, then you are better off looking at the following certifications:

This robotics course from AutoDesk is recommended if you are looking to expand your engineering knowledge in the manufacturing niche where robotics and industrial applications are involved. The course comes with four courses:

CAD and Digital Manufacturing By AutoDesk

This six-month course is recommended if you want to acquire tactical design engineering skills that you can directly transfer to your manufacturing role. Both this specialization as well as Autodesk Generative Design certification offers additional Autodesk Credentials that include a digital badge certificate. This course comes with the following modules:

If you are looking to start a career in sensor design, communications, embedded drivers, and electronics, then you need to sign up for the following online robotics courses on Coursera Plus. These courses will help you gain tactical skills for building hardware-software projects in the fields of mechatronics and IoT.

This course will help you gain a good grasp on how to use both Raspberry Pi and Arduino platforms to design and prototype IoT devices. The course comes with the following six modules:

Embedding Sensors and Motors Specialization from University of Colorado

If you are interested in learning how circuits, sensors, and electronics are designed, then you need to register for this course. This course counts towards the 100% online Master of Science in Electrical Engineering from the University of Colorado Boulder. This specialization comes with the following four modules:

The final section of Coursera Plus robotics courses is based on robot motion planning, control, self-driving cars, and advanced algorithms.

If you are looking for theory-based courses that will help you advance your engineering career in robotics, then here are the online robotics courses for you.

Robotics Specialization from University of Penn

Offered by University of Pennsylvania, this robotics course is highly recommended for beginners. You will gain a range of robotics experience – from Aerial Robotics to estimation and motion planning. This is especially important if you are interested in high-tech robotic systems or roles in writing propriety algorithms for start-ups.

This course comes with the following six modules:

If you already have some knowledge of robotics, then you might want to check out this Northwest University offered robotics specialization. Here, you will gain an in-depth study of kinetics, dynamics, motion planning, and control of mobile robots and robot arms. This course comes with the following modules:

Self-Driving Cars from University of Toronto

Finally, if you are interested in building software for self-driving cars, then you would want to check out this program. The premise of this certification is built around competencies in advanced mathematics, sensors, and software engineering. You will be required to invest a lot of time polishing your logical thinking and software development skills. This is a great starting point if your desire to work for an automotive company like Tesla, or on the latest-and-greatest autonomous vehicles. This online robotics course comes with the following modules:

Robotics courses introduce you to how robots detect and reason with the world around them, how they execute three dimensional movements in a dynamic environment and how they run or fly to perform intended functions. As you learn robotics programming online for free, you will be exposed to real world examples with drones, driverless cars, and legged robots. Most of these courses come with capstone projects that enable you to learn how to program robots to execute a range of both in structured and unstructured environments.

Sign up with Coursera Plus today and kick start your career as a robotics engineer. 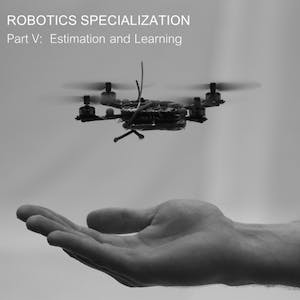 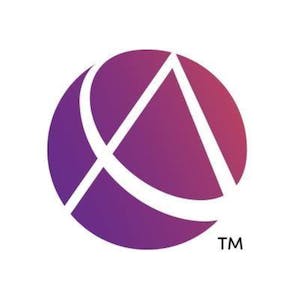 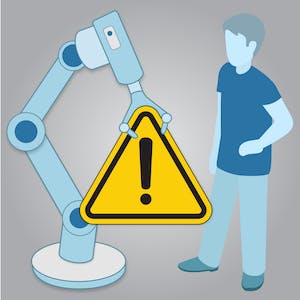 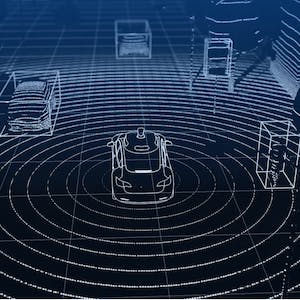 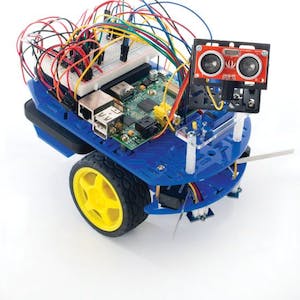