Programming for Data Science with Python Nanodegree Review: Is it Worth Your Time and Money? 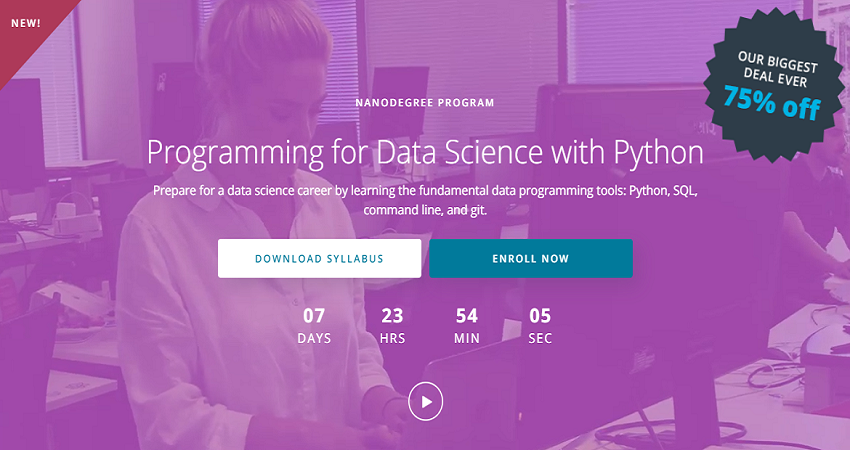 Data scientists handle complex problems, and there are basically four steps in the problem-solving process – data collection and cleaning, data exploration, data modeling, and data visualization. Basically, data science focuses on converting what is otherwise meaningless data into marketing and business strategies that are instrumental for the growth of the organization. While there are many data processing and analytics tools such as R programming, Hadoop, SQL, and SAS among others, Python remains the most popular and easy to use programming language for data science. Udacity Programming for Data Science with Python Nanodegree is designed to provide you with the programming fundamentals required for a successful career in data science.

Why is Python the best programming language for data science?

Python’s unique attribute makes it easy to use when it comes to analytical and quantitative computing. It is a leading programming language that is widely used in various industries including oil and gas, finance, signal processing, among others. Additionally, Python has been used to reinforce Google’s internal infrastructure as well as in buildings apps like YouTube.

In data science, Python is widely used thanks to its flexibility and open-source nature. Its massive libraries are exploited for data manipulation and are quite easy to learn even for beginner data scientists.

Besides being an independent platform, Python seamlessly integrates with existing infrastructure to solve the most complex data science problems.

Here are five reasons why Python is the best programming language for data science.

One of the core duties of a data scientist is data analysis; and data comes in all shapes in the real-world. Most often, data scientists have to deal with raw data that requires wrangling before analysis. And this is where Python’s many open-source libraries come in. Python tools like NumPy is the most critical tool for data cleanup and analysis.

This is yet another reason why Python is the best programming language for data science. Jupyter allows you to code and collaborates with other data scientists via a web browser. Jupyter Notebook is an incredibly powerful tool for developing and presenting your data science projects because it allows you to integrate a code and its output into one document, combining mathematical formulas, visualization, and explanations.

Another reason why data scientists love Python is its great community. Thanks to its great community, and the many professionals who are using Python for data science, you can have the peace of mind that there is an active community that you can reach out to when stuck. And you will also benefit from their work since most of it is shared as open source.

Pandas is such a crucial tool for data scientists as most data science projects start and end with it. Whether you are looking to clean and massage your data, or analyze it, Pandas is a great tool for you. Better still, its multiple functions make data import, export, and manipulation seamless. It also comes with a handy data structure like DataFrames and Series that ensure efficient data handling.

Programming for Data Science with Python Nanodegree program: Is it worth it?

A Nanodegree in programming for data science with Python from Udacity provides you with the fundamental skills and knowledge on programming language data scientists use today. Enroll for an exciting experience in the world of data science and, with the help of expert instructors, get to understand Python, SQL, terminal, and Git.

Being an introductory course, the programming for data science with Python Nanodegree program may not guarantee you a direct employment opportunity. However, it equips you with real-world programming skills and knowledge that are critical for starting or advancing your career as a data scientist. It will introduce you to the world of data science and be proficient in Python, Terminal, Git, and SQL.

So, is this 3-month Udacity Nanodegree Worth your Time and Money?

Developed in collaboration with Mode, this beginner course is for you if you have a basic knowledge of computer application, are proficient in the English language, and are interested in starting a career data science. In just 3 months, the course will equip you with programming skills in the four most crucial data science elements. The good news is you do not need any prior programming knowledge to sign up. The necessary skills in operating a computer are enough to set you on the right path toward mastering the demand tools needed to solve real-world data analysis problems. The core of the program is learning Python and SQL, two programming languages used by data scientists and analysts. The program prepares you for an advanced career in a data-related field. It also allows you to learn:

More Reading: Everything You Need To Know About Starting A Career In Data Science

What You Get From Udacity Nanodegree Perks

Technical mentor support- You will receive mentorship and guidance from experts to keep you motivated, focused, and visionary.

Flexible Learning – This program provides you with a customized learning schedule designed to accommodate your busy life. You will enjoy the flexibility of learning at your convenience. Additional perks include:

The following experts will be your course instructors for the data science Nanodegree program from Udacity:

Also, Lead instructor at Galvanize, Josh’s passion for data science has seen him share his knowledge and expertise for almost a decade. He specializes in cancer research and process automation.

As CEO of Mode Analytics, Derek’s passion for analytics drives him to share it with future analysts. He is the brains behind the analytical foundation at Facebook Yammer as well as the author of SQL school. Additionally, Derek is a mentor at Insight Data Science.

Juno is the curriculum lead at Udacity School of Data Science. Passionate about data and teaching, she has developed several courses at Udacity creating reconstructive engines, computer Vision, and NLP models and tools to analyze user behavior.

Richard is a passionate course Developer with a degree in computer science and rich experience in that field.

Karl has a solid background in data science with eight years of working experience as a Site Reliability Engineer (SRE) at Google. He is currently a Course Developer at Udacity.

Being a beginner course, there are no specific requirements for admission to the Programming for Data Science with Python Nanodegree program from Udacity. However, you must have excellent interpersonal skills and the ability to perform basic computer operations such as opening folders, files, appliances, and copy-pasting. You also need to be proficient in reading and writing English.

The following of the projects that make up this entire program.

This project is an introduction to SQL and entails working with relational databases and PostgreSQL.  You will start your learning by posting a query, then completing the data analysis project before finishing by sharing our SQL findings to answer these questions.

This project is an introduction to python programming. It includes:

This project is an introduction to version control. You will learn:

How long does Programming for Data Science with Python Nanodegree take?

The program requires 10 hours per week for study, which is necessary to complete the course in 3 months.

How long does Programming for Data Science with Python Nanodegree cost?

Overall, this beginner Nanodegree program is rated 4.7/5. Here are what previous learners had to say about the program:

I really like it and think things are very well explained. The exercises on each chapter make you identify clearly the things you got clearly and the ones you didn’t, making you revise and understand everything. The classes are not long, so they don’t get boring, and the text highlighting the most important points under the videos are really helpful. The only point against the course is that it takes a lot longer, sometimes double or even more, to complete the assignments. I think you should increase the expected time on each one since it is really demotivating. I began to think I was dumb and programming was not for me, and even wanted to quit at some point, because I took so much longer. Only after asking other people about this on the peer chat, and knowing that apparently everyone takes longer than the advised time, did I realize the problem was not my ineptitude and got motivated again. Isabel C.

I have dabbled in other introductory data science courses in the past and I must admit, Udacity is on another level. It is MUCH more difficult but in a good way. For the entirety of the SQL portion, I only felt that one question was solved using a method which wasn’t explained the lesson (SUBSTR didn’t have any video examples). Other than that one example, every other question used material covered in the course. If you take the time to go through every question and take notes as you go through the course, you should be able to take your time on the project and solve it completely on your own. I was not very strong on sub-queries when I finished the material but I used them a lot in the project and am not confident in correctly utilizing them. Terrell O.

I’m really getting a lot out of the program. It’s honestly surpassed my expectations. The project-based approach seems to be an optimal way to squeeze out quite a bit of experience from some rather difficult subjects. Despite being an engineer, I’m not the smartest person when it comes to wrapping my head around technologies. It usually takes me quite a bit of time of thinking about it, playing around with the tech, getting things wrong, before I figure it out. Doing SQL query after SQL query for the last month or two really helped with grasping the concepts. That’s by far the best way for me to learn. Two thumbs up. Thanks. Paul I.

Data is the new oil; and the data science landscape is changing quite rapidly. The tools used for making sense of raw data have also grown tremendously. One of the most popular programming languages for data science is Python. With tech giants leveraging the power of Python, and thanks to its short learning curve, there is no doubt that this is the most popular sought after programming language for data science. If you are looking for an online course that will equip you with the crucial skills you need to be a successful data scientist, then you need to sign up for the Programming for Data Science with Python Nanodegree program from Udacity today.

Understanding and Visualizing Data with Python

Get 30-day free access to any eligible Nanodegree program.